India Today decided to put me on the cover for the March issue of Simply Punjabi!

Three of Punjab’s top start-ups have something in common: they are all helmed by women. Compelling businesswomen all, they stand testimony to the grit one needs to reach the upper echelons of the business world. SIMPLY PUNJABI meets these trailblazers for a quick look into their work, and personal lives. 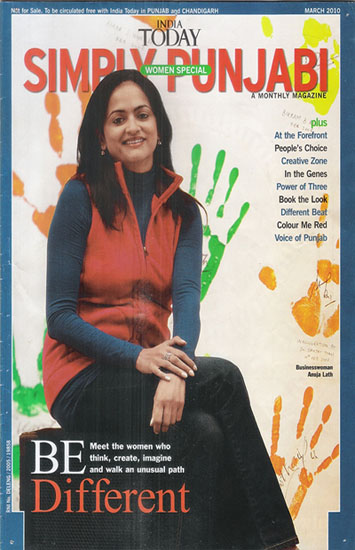 RedAlkemi is a funky name, and the company, predictably, packs quite a punch. The current industry leader in search engine optimization strategies, RedAlkemi in the third venture of Anuja Lath. Her journey began twenty years ago, when Lath and Atul Gupta, both good buddies and fellow advertising students at the Sector 10 Government Arts College, started Pugmarks Design Studio together.

Today, Lath and Gupta are married to each other, and have two daughters. They have chalked up other achievements as well–their two ventures after Pugmarks: Pugmarks InterWeb and RedAlkemi. Today, Lath, 41, is the chief operating officer of RedAlkemi, which was founded in 1986. The husband and wife duo work closely, even sitting in adjacent cabins in their office. But it’s Lath who spends more time at her desk. “Atul’s job is to wear his thinking cap and generate ideas,” Lath explains. Meanwhile, Lath is responsible for almost everything else, from human resources to marketing and also event management.

Lath’s daily schedule is fixed. She drives down to work at around noon and stays till six  p.m. Decentralisation of work is a major priority at RedAlkemi, and only about six or seven employees report directly to Lath.

She says, “All I have to do is meet them. Each of them handles their part of the job by themselves.” She moves to the gym directly after work for her workout. Not only is she particular about fitness, she also uses this time to socialise with a few select friends.

Lath also makes sure her two daughters, Ada, 16, and Anya, 14, get to spend quality time with their mother. “I regret that they won’t get to see and experience the struggle that we passed through,” says Lath. “They have access to everything that a teenager wants.” But Lath knows they are learning the right lessons from her. “They see me conduct myself and learn from it. I am not an overprotective mom who mollycoddles her children. I feel a little detachment is essential”. 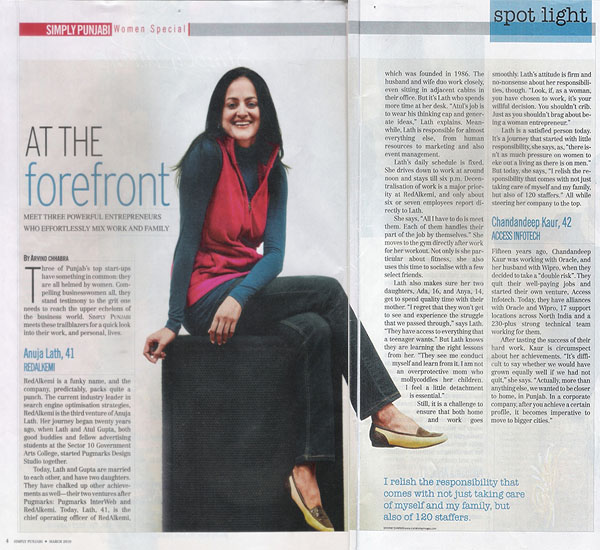 Still, it is a challenge to ensure that both home and work goes smoothly. Lath’s attitude is firm and no-nonsense about her responsibilities, though. “Look, if, as a women, you have chosen to work, it’s your willful decision. You shouldn’t crib. Just as you shouldn’t brag about being a woman entrepreneur.”

Lath is a satisfied person today. It’s a journey that started with little responsibility, she says, as, “there isn’t as much pressure on women to eke out a living as there is on men.” But today, she says, “I relish the responsibility that comes with not just taking care of myself and my family, but also of 120 staffers.” All while steering her company to the top.

Great to see u on the cover page. U r looking rocking. My first work experience was under u.(Long 14 years back) And believe me u have always been an inspiration to me. May God Bless U and ur family.

That's really nice to read about this! I hope to read more about this now! Congrates!!!!

Congratulations Ma'am… You make us all proud :-)

Congrats Anuja, It's a great feeling to work under your guidance.

Thanks Vineetha, great to hear from you. I still remember your daily hair wash and pooja bindi you used to wear to work. I do miss you, it was great working with you too!

Anu congrats though its late now but well done...keep going both of u.

Great job Anu. Always proud of you. God Bless and lots of love.

Atul and Anuja are truly deserving of the success they have achieved and its a great feeling to have known and worked with them for over a decade. My best wishes to you and the RedAlkemi team!

Great job Anu. Always proud of you. God Bless and lots of love.

Thanks a lot for all the wishes, compliments and thoughts. The past two weeks have been kind of overwhelming; with me getting calls, emails and SMSs from people I did not even expect to hear from. Feels so so good guys, thank you for making me feel wonderful and loved :-)

Congrats. We are very proud of you.You have placed us at the top of the world.God bless you.

We keep feeling prouder and prouder Anuja..way to go :) ..

Dear Anuja,
Congratulations from both of us. Wish you many more laurels.

Any nominations of woman of the year

Congratulations... You make us all proud :-)

Congrats Anuja......You are an inspiration to all of us

Hey Anuja, congrats. Keep it up sweety. You make us all proud

Congrats Anuja, this is awesome. You look great on the cover :-). Keep rocking, and continue to inspire us..