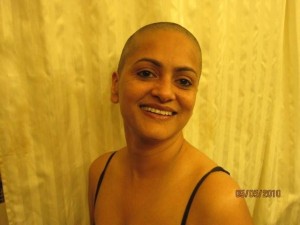 For years now, I’ve wondered what the exact shape of my head is. The only way to find out was to take off all the hair and go BALD…. which I did on the 5th of May 2010. Yippee…. finally I know!!

OK, its wasn’t so much the shape that I wondered about, but maybe a combination of a few things… how would it be to wake up in the morning and not have to comb or shampoo all that hair? How would a bald head feel to my own hands, would I look weird or good or just OK? Is my head symmetrical or bumpy? Could I just get up and DO IT??

Turns out I could, and I don’t look so bad. The shape of my head is nice from the front, the back is a little flat and it would have been nicer had it been a wee bit more egg shaped… but never mind… there are no bumps and I am completely symmetrical!!

Have had all sorts of reactions so far, some good, some not so good! My mom kept laughing and saying she doesn’t want to talk to me, but she did eventually. My dad called and said “Hello beautiful stranger”, my husband loves it and has even more adoring sparks in his eyes, my younger daughter shuts her eyes whenever she sees me, the older one hasn’t seen me yet, but says I’m mad! A few friends who’ve seen me so far think it looks great… even stunning! So far so good… no one’s made me feel lousy about it just yet, other than Anya, who’s coming around and has started to reach out for my bald head and feel it once in a while. Mostly she keeps shaking her head and saying “My Mom is bald, I don’t believe it!”

So far, great feeling…. maybe when the novelty of a bald head wears off, I’ll start missing my long, beautiful hair.

For now, I feel bald, bold and beautiful!!!!

Oh là là, that's incredible!
I never imagined that a woman could look so belle & beautiful without any strands of hair!!!
Wish I could witness it...

Mom,
This is amazing.I know this is a late comment but still..
I messed up my biology exam because you did this..one day before the day of my exam.
I know i was begging you on my knees not to do this.
But..we're cool..hehe..you look nice..And pretty..
And you're more involved with us when it comes to accessories or clothes cause you always ask us.!
You look Awesome.!
Brrruuuahhh.!
(YPS affect)

Baby, I think I'm going to fly over and whisk you away from Atul. Well done for having the bottle to do and wow, its paid off. I think you look great. I'm sure lots of Chandigarh girls/ladies envy you and the men desire you - not sure that was the plan but you're now the new girl in town!!
p.s. I've been pondering to do it myself, maybe I'll join your fan club soon :-)

Hmm...i looked at the picture once, then again, read the blog and then looked at it again! Notwithstanding the knowledge that you were going to do it some day, I'd be lying if i said i wasn't shocked. But, dude, you're looking every bit the DIVA you are!! I don't know if you've figured yet or not, but now since your lovely locks that were a reason for ample distraction are gone; your eyes and your smile are looking ever more splendid!! I love it!! OOOH, how much more heart ache are you going to subject my poor T to?? ;)

So, is this bhaiya's creation...? One thing is for sure..you are the only person who i know has the guts and the attitude to pull this off :)I need to see you in person..please come to Delhi soon.

wow mam, u ar looking gorgeous in ur new avatar:) am dying to see u in person...only u have guts to do this...KEEP ROCKING:)

No doubt you look as beautiful as ever. But I loved your hair :(

hey gorgeous,
oh my god......you look wonderful any which ways. only you can do this. well you look grrrr8.......your actions freak me out though!!!! digi calls you crazzzy. kids were surprised.

Mind Blowing! You still look bold & beautiful. Only you can do this....

Bald, bold and beautiful.. Thats a totally apt description. Its going to be difficult to take eyes off you for some time..:-) I think you look amazing!

I think you look damn SEXY !!

Anuja, this is WOW, only you could have done it and looked gorgeous doing it. Its so heartwarming to see someone who has the guts to do something so radical.

However, after your new "Bald and the Beautiful" Avatar, I hated washing my long hair today morning, what a pain :-(..

I am now dying to feel your head, and will wait for Monday to do so. And do wear a Saree before your beautiful hair grow back, you are going to look amazingly sexy wearing one.