Just finished watching Dabangg with the husband and kids over beer and pizza. What a movie! I truly loved it. Salman Khan at his best, to say the least! This man can do the most ridiculous stuff on screen and look completely convincing doing it. We laughed our heads of at how he jerks his arms in the Dabangg song, and pulls his trouser waistband up and down and looks like an idiot doing it, but in all seriousness and a sense of being completely at home with his moves. Amazing! 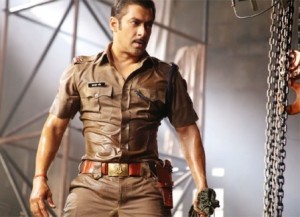 I’ve never fancied the man in general, but I think SK outdid himself in this movie… you can just see how he refuses to take himself seriously, and probably works with the director to add his two bits to all the silly moves that suit him completely. And the dialogs… hilarious… pichware me pichkaari… who thinks of dialogs like these?? I’m inclined to believe he came up with some of them himself… I had to explain to the kids that he meant the WC jet to clean the bottom! And the first action sequence where he’s fighting a whole bunch of goons all by himself and gets soaked in oil… all he had to do was take off his shirt and the villains slithered off his body while attempting to attack him! This sequence apparently took them 11 days to shoot…he had to be dunked in mustard oil to create all the oily effects.

In the looks department… hot, hot, hot and so so cool! He managed to look hot as hell and make everything so believable. Goons flying around, his shirt ripping in places when he discovers the villan beating him up actually killed his mom. Telling the girl whom he fancies, that he’ll wait for her old man to pop it so that he can marry her after…. very cool style indeed!

For the next few days, I can just see the kids and me breaking into the Dabangg arm jerking moves and remembering Chulbul Pandey everytime we bump into each other

Have enjoyed a Salman Khan movie so much for the first time ever… to the extent that am actually skeptical about watching any more, just in case he doesn’t live up to a character like Chulbul Pandey!

Wow! this is awesome Anuja, your review inspired me to watch this movie, and I loved it :-). Thanks so much for sharing your thoughts, but you need to be more regular with your writing. Its great fun reading your blog, so please take out time and keep posting great stuff..